The Energy Crisis, The Legal Issues With Don’t Pay UK, And An Alternative Way Of Protesting Energy Prices

Stories about the trodden-on rising up in defiance of the powers that exploit them are as old as time. It’s the concept of countless films, books, and even children’s stories. Now, with the rising cost of living and soaring energy bills, both hushed and impassioned conversations are taking place in UK households, schools, businesses, pubs, and online too and the question many are asking is, is the only option left, civil disobedience?

Don’t Pay is a grassroots movement that’s gained attention for its response to the energy crisis. The movement suggests that if the UK public refuse to pay their energy bills on mass then we will be metaphorically throwing a spanner in the works of the system. They believe that energy companies, or the government, will be forced to reduce energy bills, by supplying energy on a not-for-profit or reduced profit basis during this crisis.

Generally, we opt to take a neutral approach to topical issues. However, you’ll be hard-pressed to find anyone who believes the energy companies are acting particularly ethically at the moment. Especially considering that BP has confirmed their profits have tripled recently and other big suppliers have been seen to be paying their shareholders’ eye-watering bonuses. Meanwhile, Ipsos report that 9 in 10 Britons are worried about the rising cost of living and 75% are concerned about their ability to pay their energy bills (August 2022). So, it’s not only an issue of whether it’s fair to be passing this energy cap rise onto the customers, it’s a case that many people simply won’t be able to afford to pay these coming bills.

Does this mean that the Don’t Pay movement is a good idea?

What Is Don’t Pay UK?

At the time of writing (August 24th) the campaign has gained the registered support of over 113,624 people. Describing itself as a grassroots movement, #DontPay is on a mission to harm the energy companies financially through the mass refusal of UK households to pay their October bill. The logic goes that the financial impact of this will hit energy companies enough to bring them to the table to discuss a revised approach to the energy crisis. One that does not force many UK households to choose between heating and eating.

Yet, could this plan to refuse to pay energy bills actually cause more harm than good to the very people it’s claiming to help?

We spoke to Commercial Lawyer, Suzanne Harley-Davies about the implications of not paying your energy bill, as suggested by the Don’t Pay movement.

“Refusing to pay your energy bill is not a good idea,” Suzanne confirmed. “I do not recommend it at all because it will very quickly damage your credit rating which can affect your ability to rent a home, buy a house, get approved for all sorts of payment plans and take out loans. If you’re a business owner then, depending on how your company is set up, it might even affect your business.”

“When you don’t pay your energy bill you will be a debtor and that means a bad credit rating.”

Many other legal professionals are advising the same as Suzanne and also point to the emotional toll being in debt can take on our mental health. Apart from the fact that, if you owe money to your energy supplier, they can obtain a court order to force access into your home and install a prepaid meter.

Will The Don’t Pay Movement Work?

Don’t Pay believes that if enough people take this approach then it will have the effect of Margaret Thatcher’s attempt to introduce poll tax in 1990. However, there are a few notable differences. Most importantly, this was a new tax being imposed by the government whereas your energy is a
business contract between you and the supplier and you’re contractually obligated to pay it under law. Furthermore, the poll tax being collected by local authorities meant that not paying wouldn’t affect your credit rating in the same way. 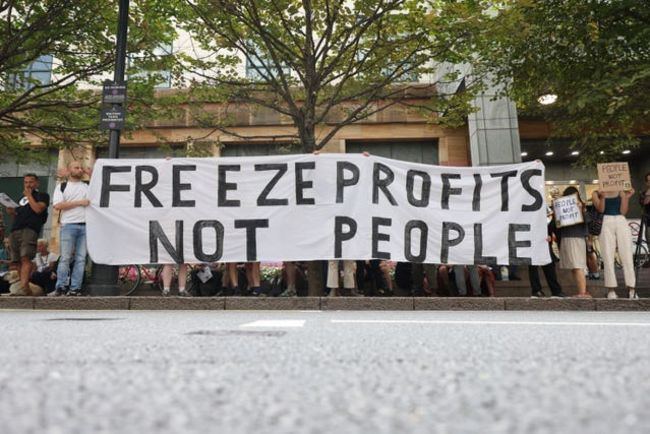 Credit rating is important in the Don’t Pay argument because even if you believe in the theology of the idea, it will make it difficult for most people to commit. For instance, in a student house, the whole household may agree and pledge support for the #Dontpay movement, but when it comes to October only one of those students will have their name on the bill. Will they really want to risk being unable to rent another property when it becomes time to move? Will a homeowner with a young family risk potentially putting their family through having debt collectors turn up on the doorstep?

Unfortunately, regardless of the injustice of astronomical energy bills, from a legal standpoint, courts will be forced to find in favour of the business.

An Alternative To Don’t Pay UK

But, there is another way, Suzanne reassures us. “There is a mass action that can be taken that will not leave people vulnerable to creditors and that’s to force the energy companies to be answerable to the Energy Ombudsman.”

“When the bills start to rise beyond reason, which we’re expecting to see in October, then you write a complaint to your energy supplier. Whilst this is being processed you are not obliged to pay your energy bill and it’s recommended that you don’t.”

We asked Suzanne what consumers would have to do to trigger such an effect.

“Step one is for as many people as possible to cancel their direct debt payment. This doesn’t mean not paying, it just means only paying for your usage.”

“When the bills start to rise beyond reason, which we’re expecting to see in October, then you write a complaint to your energy supplier. Whilst this is being processed you are not obliged to pay your energy bill and it’s recommended that you don’t.”

As a Commercial Lawyer, Suzanne was able to assure us that no interest or charges could be added to your bill whilst in dispute. Furthermore, the supplier is unable to refer you to debt collection as you would not be considered a debtor. This means your credit would not be affected.

“But, surely the energy company won’t reduce your bill just because you’ve complained?” we asked Suzanne.

“Maybe,” she told us. “They may offer you a small reduction but the point is that you don’t accept it. A few people getting their bills reduced for one month isn’t going to have a widespread effect. So what you do is continue to reject any offers until they send you a ‘Letter Of Deadlock.’ This means they are unwilling to negotiate any further and it means they are obligated to hand your complaint over to the Energy Ombudsman.”

“For every complaint referred to the Energy Ombudsman, the energy company is charged £500. Furthermore, they are only allowed to submit a fixed number of complaints before putting their ability to operate in jeopardy.”

Similarly to the Don’t Pay movement, this strategy relies on multiple households across the UK flooding the Energy Ombudsman with complaints in a bid to force them to challenge the supplier’s ability to operate at all.

Potentially, this action could force energy companies back to the table to review their approach to the energy crisis. At the very least, it protects individuals from being prosecuted for non-payment whilst their bills are in review or with the Ombudsman.

If you are concerned about the rising cost of living or the energy crisis please seek support. Organisations who can help you include: